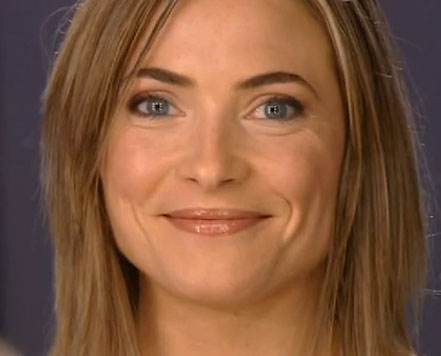 
Lisa Rogers is a familiar face on British television, although she doesn't appear anywhere near as much she used to. She's had a long association with Scrapheap Challenge, Channel 4's Big Breakfast, and has presented Match Day on the ITV Sport Channel and also regularly reported for ITV1's On the Ball. Amongst other television shows, she has presented Carlton TV's motoring series Pulling Power, Football Fever on the BBC and BBC Choice's 45 Minutes of Football. Additionally she has been a regular presenter on Top of the Pops Plus. More recently as she now lives in Wales, she pops up on Welsh television. She also pops up every now and again on the odd TV programme talking about her life as a wild child, and those list of lists type shows.

Lisa Rogers has even had a go at acting, "starring" in a television drama called Lock, Stock where it is said that she complained about the long hours and the cold. We could see from her infamous stripping scene that it was cold on set as her nipples were very prominent. From an early age, Lisa always wanted to work in television. She began her television career working as a researcher and it wasn't long before her rather obvious talents and assets were noticed.
Earlier in life, when at school, Lisa had summer jobs working in a chocolate factory and as a cleaner. When she got to university, Lisa was a typical student in that she watched a lot of television, and ate loads of Pot Noodle - allegedly. Although she was set on being on TV in the future she decided not to do TV related summer jobs. During her summer breaks, she had a variety of jobs including one stretch as being a nanny, which she really enjoyed. One Christmas she managed a Santa's grotto. Can you imagine her sitting on Santa's lap?
As you know, Lisa Rogers is a regular face on British TV and she is probably most famous for presenting the show Scrapheap Challenge. She started in the industry by being a researcher, working behind the scenes before she got her big break in front of the cameras on the Big Breakfast show. Amongst many TV programmes she has presented since then include the popular cult series Scrapheap Challenge and Lisa was also in front of the cameras for two shows called Mistresses and Loose Women. She has also got involved with a show called The Perfect Vagina. Make your own mind up as to why the producers would choose Lisa Rogers to front such shows. One other thing, you can check out books of Lisa Rogers on Amazon.